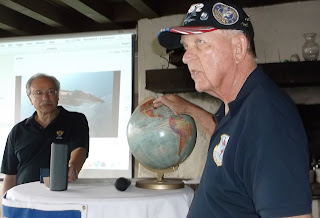 By using the model of the Global, Captain Sampson explained about B-52 world operation in speaking about known patrol routes flown / patterns flown as for example those flown during Operation Chrome Dome during the Cold War era 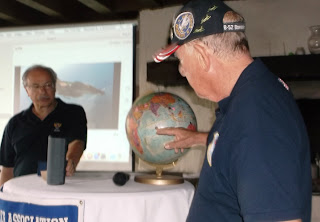 During his presentation and in great details, Captain Sampson showed the various spots on the global that USAF has and currently sustains active B-52 operations in support of U.S. National interest 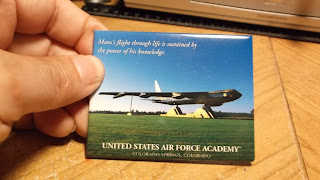 Having been an active and participating member of the AIR FORCE ASSOCIATION as known then Miami, now Miami-Homestead Chapter since 2005, I have never experienced a situation where a presenting speaker brought appreciation gifts for those in attendance. Such was the case today, as Captain Sampson being the Gentleman that he is gave out these 3 x 2.5 inch magnet sticker showing a B-52 known as "Diamond Lil" which he flew in Vietnam and of which his aircraft is on display on the grounds of the USAF Academy in Bolder, Colorado 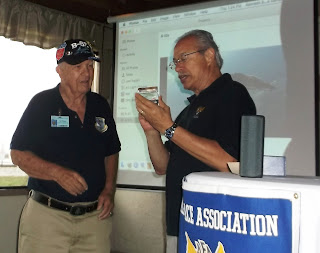 In appreciation for his outstanding and informative presentation, Lt.Col. Rodrigo "Rod" Huete USAF (Ret.) and Chapter President presented Captain Samspon with the Chapter speaker token of appreciation gift an acrylic block with a nicely, laser etched rendering of a Boeing B-17F Bomber, which is the Chapter AFA-317th adopted mascot aircraft, which proudly represents the Chapter

Miami, Florida 12th November 2015: Those who where in attendance at the November luncheon of the Miami- Homestead AIR FORCE ASSOCIATION Chapter 317th enjoyed a great presentation by one of their own. Chapter member Captain Kenneth Sampson USAF (Ret.) gave an informative and illustrated presentation about USAF B-52 operation in Vietnam, as well as his own experience from his eight (8) combat tours and accomplished three hundred sixty three (363) missions over North Vietnam and Cambodia.
In great detail, Captain Sampson explained the flight and route patterns that he flew on his various mission, as well as extrapolated on the purpose and operation of the USAF "Chrome Dome" Operation in where the USAF keep fully nuclear armed B-52 airborne on a rotational schedule with no one B-52 aircraft being a mere two (2) hours away from any Russian target of interest back during the heated days of the Cold War. Upon his presentation Chapter President Lt. Col. Rodrigo "Rod" Huete proudly presented Captain Sampson with the Chapter speaker token of appreciation gift consisting of a Boeing B-17F laser etched into a clear acrylic block. The Boeing B-17F (with no chin turret ) is the aircraft that represent the Chapter. Well done Captain Sampson.