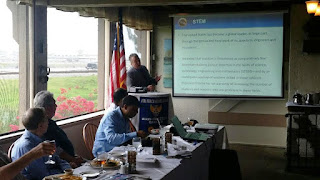 Shown is Mr. McDaniel speaking about Science, Technology, Engineering and Math (STEM) to those who were in attendance at the June 2016 luncheon. Mr. McDaniel is strong supporter of STEM 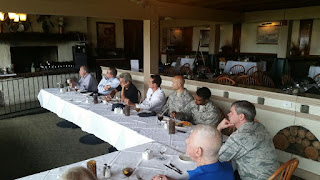 As always the AFA-317 enjoys the presence of the USAF element from locally based U.S. Southern Command. Shown at the corner of the table is Major General Michael Plehn Chief of Staff at Southern Command and a great supporter of the Air Force Association 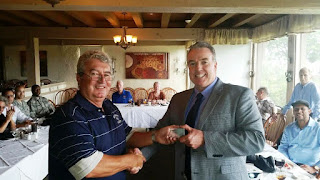 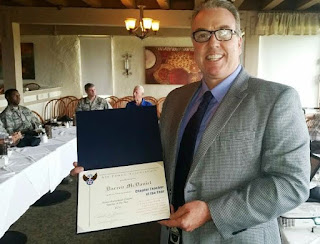 
Miami, Florida 9th June 2016: At the June luncheon of the Miami-Homestead AIR FORCE ASSOCIATION Chapter, the 317th all of those in attendance were treated to an awesome and informative presentation on subject of Science-Technology-Engineering & Math (STEM) by Mr. Darren McDaniel the AFA-317th "Teacher of Year". STEM is a topic that the AFA-317th strongly supports within the community via Cyber Patriot and other related programs geared to foster and encourage the attributes of STEM within the youth of Miami-Dade.
Mr. McDaniel an avionics instructor at the George T. Baker Aviation Technical College led his Cyber Patriot team consisting mostly of female students to victory in recent competitions. As former United State Marine, Mr. Daniel "Can Do" attitude which he obtained during his days as a USMC F-18 Hornet fighter / attack aircraft technician is contagious as it has been pasted down to his students.
The AFA-317th is proud to have Mr. McDaniel as their "Teacher of The Chapter" and encourages other local Miami-Dade teachers to consider applying their experience, talents and tutelage as Mr McDaniel has done.
Posted by AFA-317th Public Affairs Office at Monday, June 27, 2016