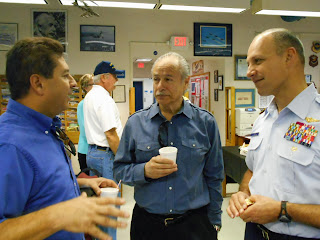 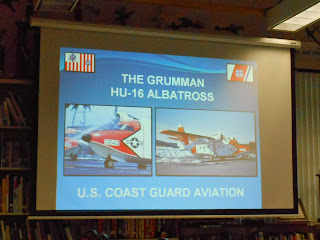 The visual presentation of the HU-16 project at the George T. Baker Aviation School 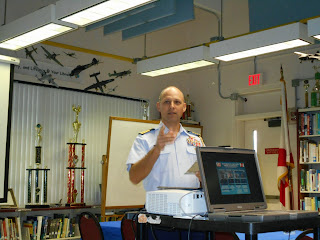 Captain Richard Kenin, USCG speaks to the audience of the school students and instructors who led an amazing effort toward the cosmetic restoration of the HU-16 nose section about U.S. Coast Guard Aviation history, that of the HU-16 and how the HU-16 also served with the U.S. Air Force as the SA-16 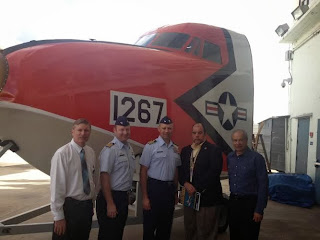 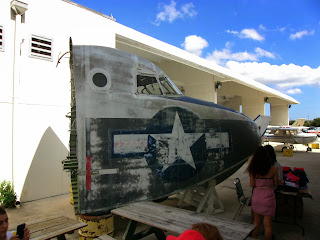 The nose section of the Grumman Albatross as it looked when it arrived at the George T. Baker Aviation School back in October 2012. The section was the sole section of the entire aircraft that was sadly scrapped at the Opa Locka Airport

Miami, Florida December 12th 2013: The Air Force Association Miami-Homestead Chapter 317th was in attendance at the George T. Baker Aviation School along with elements from U.S. Coast Guard District 7th to formally dedicate the wonderfully, cosmetically restored nose section of the Grumman HU-16E Albatross by the school students. This project was the vision and brainchild of past Chapter President, Mr. Benny F. Benitez, Founder and CEO of the Miami. Florida based 94th AeroClaims-Aviation Consultant Group.
The idea was to tie the aviation students at the school with U.S. Coast Guard aviation maintenance personnel from U.S. Coast Air Station Miami located at Opa Locka Airport (KOPF), so as to work as one in a well rounded community project. Present at the dedication ceremony was Captain Richard Kenin, USCG, the Chief of Staff for USCG 7th District and former Commanding Officer of U.S. Coast Air Station Miami as he representing Rear Admiral John. H "Jake" Korn who sent his "That a Boy" for a job well done. It should be noted that the United States Air Force did operate Grumman HU-16E during the Vietnam War along the coastal areas of Vietnam as well as within the Mekong Delta to assist in the Search and Rescue (SAR) mission of downed American airmen. Chapter President Lt.Col Rodrigo "Rod" Huete, USAF (Ret.) was in attendance and proudly presented the Chapter during the presentation and ceremony.
Posted by AFA-317th Public Affairs Office at Sunday, December 15, 2013