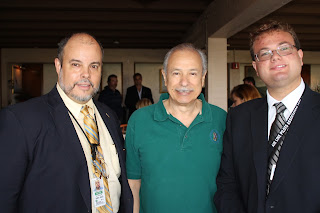 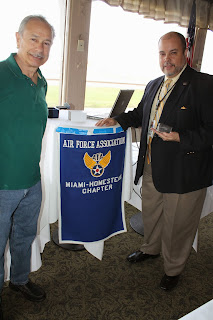 In appreciation of his presentation on the South Florida Unmanned Air Vehicle (UAV) Special Project Development Group home grown project to develop, test and fly Miami's first ever, home grown (UAV) in conjunction with the students from the George T. Baker Aviation School, Lt.Col Huete presents Benny with the Chapter guess speaker appreciation gift consisting of a laser engraved / etched Boeing B-17 in a glass cube. The Boeing B-17 is the Chapters mascot aircraft 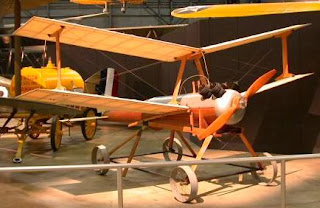 The Unmanned Air Vehicle (UAV) of its days, the Liberty Eagle designed by John Kettering for the U.S. Army in 1918 and the first (UAV) to fly over the State of Florida airspace of Cook Field in Arcadia, Florida. The popular name in aviation history for the Liberty Eagles is the "Kettering Bug" 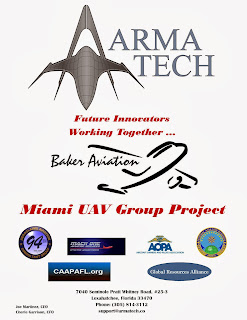 The foundation group as comprised of the companies that are leading the way with the introduction toward (UAV) awareness to the students of the George T. Baker Aviation School. Worthy mentioned to Arma Tech of West Palm Beach, Florida who graciously provide the CGS Hawk ultra light aircraft on a long term loan to the school and of which shall act as the primer platform for flight testing

Miami, Florida 14th November 2013: The Air Force Association Miami-Homestead Chapter AFA-317th hosted a special presentation prepared and given by former Chapter President, Mr. Benny F. Benitez, Founder and CEO of the 94th AeroClaims-Aviation Consultant Group on the early story of Unmanned Aerial Vehicles (UAV's) and the launching of local, grassroots project to convert an off the shelf ultra light aircraft known within the market as the CG Hawk into the first ever (UAV) built in Miami, Florida by aviation students from the George T.Baker Aviation School.
The CG Hawk has been acquired as it been placed on long term loan to the school for the sake of the project by West Palm Beach, Florida based Arma-Tech. The project is expected to take a few years, as funding needs to be collected to support the various items needed to fully convert the CG Hawk into a (UAV). The fist phase of the project shall be the assembly of the disassembled CG Hawk by the school and functional ground test before any manned functional test flights.
AFA Chapter President, Lt.Col. Rodrigo "Rod" Hutete USAF (Ret.) who is a rated Federal Aviation Administration (FAA) Designated Engineering Representative (DER) Test Pilot shall be conducting the manned functional test flights in the future.