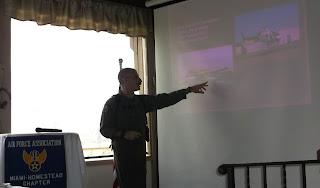 Sergeant Cohen explains to those in attendance the fleet in which the Miami-Dade Police Department utilizes, which consist of both fixed and rotary wing aircraft's based at both Opa Locka (KOPF) and Tamiami (KTMB) airports within Miami-Dade 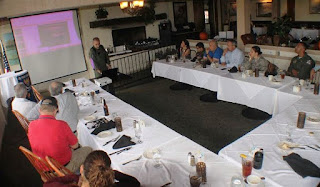 A birds view of the luncheon with everyone amazed with the information being presented by Sgt. Cohen 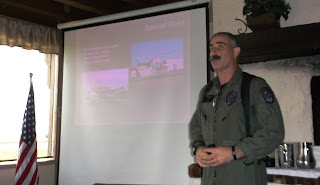 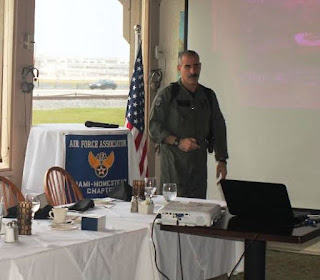 Sgt, Cohen explained in detail as to how the Air Unit supports and cooperates with Ground Units on various types of "Call Outs" and often the Air Units are the game changers in a situation 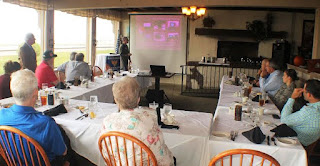 October was a full house with well over 20 attendees. Those who arrived first got the upfront seating as seating in the rear was provided for this who arrived late 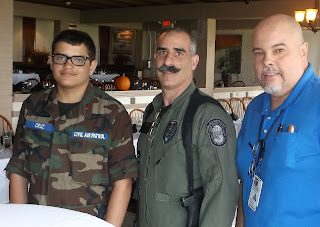 Shown from left to right are Cadet Airmen 1st Class Civil Air Patrol / Chapter member A. Cruz, Sgt A. Cohen Miami-Dade Police and Benny F. Benitez former Chapter President and the current Vice President of Special Projects who reached out to Sgt Cohen and secured his presence for an amazing and informative luncheon presentation 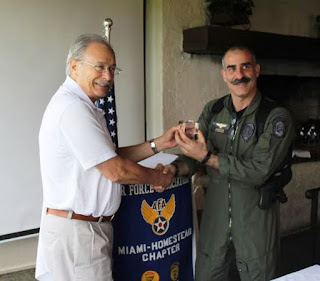 Shown is the Chapter President, Lt. Col. Rodrigo "Rod" Huete presenting Sgt. Cohen with the Chapter luncheon speaker appreciation gift, the Chapter mascot aircraft the Boeing B-17F laser etched crystal block. Being both pilots Sgt. Cohen and Lt. Col Huete enjoyed speaking to each other about the aircraft that they have flown 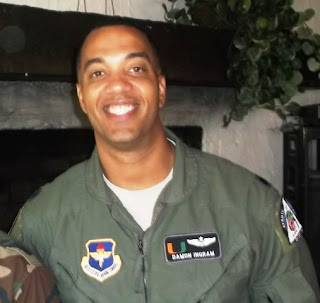 When asked as to how he enjoyed the lunch and the informative presentation given by Sgt. Cohen the expression on Lt. Col D. Ingram said it all! AFA-317th luncheon are always both enjoyable and informative

Miami, Florida October 8th 2015: From former SR-71 pilots to Two Star U.S. Air Force Intelligence General to Navy Admirals, the Miami-Homestead Chapter of the AIR FORCE ASSOCIATION, Chapter 317th has and maintains a monthly line up of interesting and informative speakers that could rival the CBS news program 60 Minutes. With that said the October speaker, Police Sergeant A. Cohen from the Miami-Dade Police Department Aviation Unit was yet another dynamic speaker that gave all who were in attendance an informative insight into the Department aviation capabilities.
Sergeant Cohen explained that the current operational fleet consist of the EADS / Airbus AS350 AStar helicopter of which in the last few years have replaced the older Bell Jet Ranger helicopters. Unknown to many, the Department also has a "fixed wing" asset in as they own and operate a Cessna 172. We learned that the Miami-Dade Police Department was the first civilian law enforcement department to employ and utilized Miniature Air Vehicles "MAV's" via the use of the Honeywell made T-Hawk. We learned that the ten (10) fully, Federal Aviation Administration (FAA) rated pilots, which make up the unit, all hold dual ratings to fly both rotary wing aircraft's i.e. helicopters and fixed wing aircraft's i.e. planes.
All who were in attendance bombard Sergeant Cohen with many questions which were spawn by the shear level of interest and engagement that we all experienced.We at the AFA-317th wishes to thank Miami-Dade Police Sergeant Cohen for his time and outstanding presentation.
Posted by AFA-317th Public Affairs Office at Tuesday, October 13, 2015