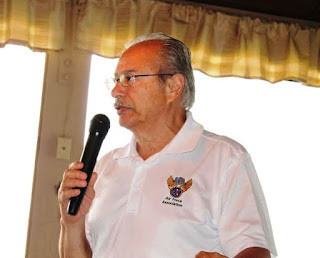 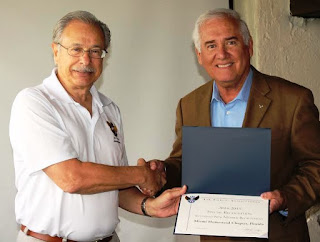 Receiving the award for his effort applied for the benefit of the Chapter is Mr. Raymond G. Bush, Jr., the Chapter Vice President of  Community Partners / Membership. Well done! 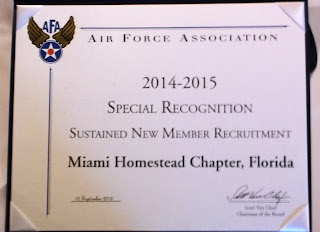 A close up of the AFA-317th Chapter most recent accomplishment

Miami, Florida October 8th 2015: In typical AIR FORCE ASSOCIATION (AFA) Miami-Homestead Chapter 317th style when the 317th sets out to accomplish a goal just the like tough and venerable Boeing B-17 who flew through enemy flak to make their bombing run, the AFA-317th is always on target! Such is with the Chapter latest accomplishment in being recognized by AFA Headquarters up in Washington D.C. for the Chapter sustained new member recruitment.
It should be noted that the 317th by AFA standard is considered a "Large" Chapter as the current membership standing is at 365 members.
This effort is attributed the effort of Chapter member, the Vice President of Community Partners, Mr. Raymond G Bush Jr.(shown above). Mr, Bush as been instrumental in his effort and has been yet another motivated and contributing Chapter member. It is ironic that the 317th relates to the Boeing B-17F as their mascot aircraft to represent the Chapter in as the leadership within the Chapter under the guidance of the President Lt. Col. Rodrigo "Rod' Huete USAF (Ret.) and their Vice President, former USAF Major, Ted Kammire and the rest function and perform as a "Crew' for the common goal of the Chapter. Well done to Mr. Bush!
Posted by AFA-317th Public Affairs Office at Tuesday, October 13, 2015