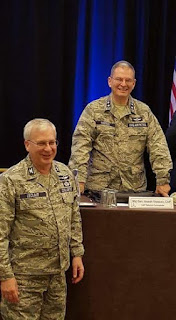 
Miami, Florida 29th February 2016: With last year Congressional approval, the Civil Air Patrol (CAP) became part of the "Total Force" concept within the U.S. Air Force which comprises of USAF-Active Duty, Reserve, Air National Guard and now Civil Air Patrol. In keeping with their newly appointed alignment with the U.S. Air Force, the CAP is exploring the possibility of changing their current, woodland green "Battle Dress Uniform" (BDU) to the current "Airmen Battle Uniform" (ABU) as with their counterparts in the other components of the total force. Shown above are CAP National Commander, Major General Joseph Vazquez and the Northeast Region Commander, Colonel Dan Leclair in their (ABU) Final approval is pending, but it appears that the "Total Force" concept may have visual uniformity among the four components.