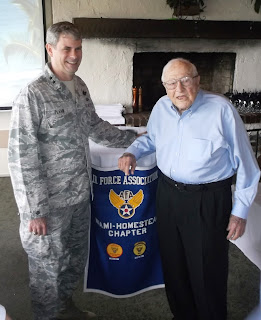 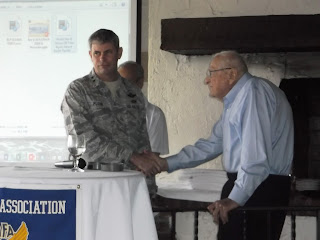 Major General Pheln pays tribute and thanks 2nd Lieutenant Stuart Newman for his service and presented Lt. Newman with a Southern Command challenge coin, which was passed within the handshake 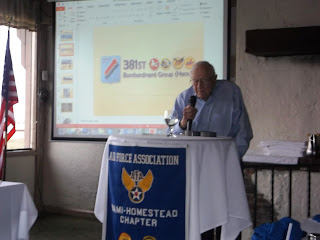 2nd Lieutenant Newman delivered an amazing recollection and shared details of his B-17G combat experience with his crew. He kept everyone in attendance both amazed and laughing with his brilliant sense of humor 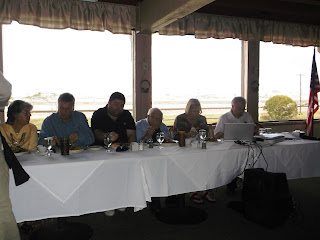 The March 10th AFA-317th luncheon was a full house with all 30 plus seats filled. As we all came out to hear 2nd Lieutenant Newman speak and to thank him for his service 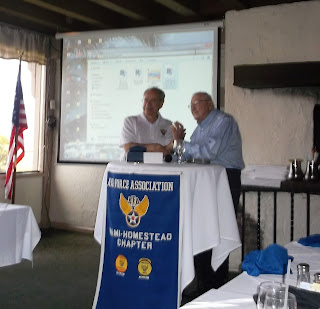 In appreciation, AFA-317th Chapter President Lt. Col. Rodrigo "Rod" Huete USAF (Ret.) presented 2nd Lieutenant Newman with the Chapter crystal, laser etched block with a B-17F image inside of it as well as the Chapter B-17 challenge coin

Miami, Florida 10th March 2016: This month the Miami-Homestead AIR FORCE ASSOCIATION Chapter, the 317th was honored by having U.S. Army Air Corp., 2nd Lieutenant Stuart Newman a World War II Boeing B-17G, Flying Fortress Bombardier / Navigator as their guest speak at their monthly luncheon.
Lt. Newman captivated a full audience of 25 plus who were in attendance with his vivid and detailed accounts of his B-17G combat experience within the 8th Air Force, 381st Bomb Group, 533 Bomb Squadron. He did this with a pure sense of charm and laughs that only a young 93 years U.S. Combat Veteran could deliver.
It was a sheer honor for the Chapter to have such an amazing piece of our nation history present before all of us and to have enjoyed the time spent. Also in attendance was yet another USAF Navigator, but this one a bit more younger than Lt. Newman, as the 317th had the double honor of having the presence of Major General Michael T. Plehn, USAF, Southern Command Chief of Staff.
We all at the AFA-317 wish to thank both Lt. Newman and Major General Plehn for their time and to have made the March 2016 a most memorable occasion.
During his speech, Lt. Newman proudly mentioned that he is now the newest and yet the oldest member of the AFA-317th. With a hardy AFA-317th spirit, we say Welcome! to the Chapter.
Posted by AFA-317th Public Affairs Office at Friday, March 11, 2016