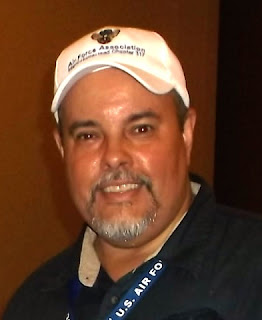 Benny shown here with Captain Martin Percifield of the communication, aerospace education and safety officer at the Patrick Composite Squadron CAP-293 based out of Patrick Air Force Base 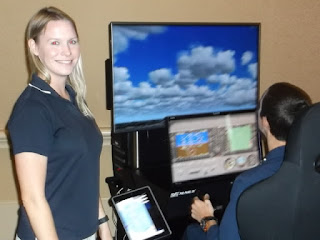 Shown is Lauren Brown of Elite simulation solutions. Elite was present with a very impressionable flight simulator unit that many of the young CAP Cadets and adult senior members tried out and experienced the sensation of flight given by these fantastic training units 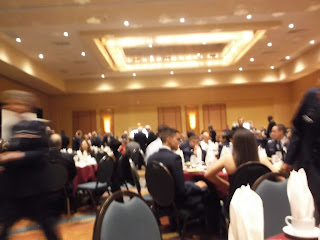 
Orlando, Florida 16th April 2016: In the spirit of "Joint Operation" as our brethren U.S. Air Force and military folks carry out, we here at Miami-Homestead AIR FORCE ASSOCIATION, the 317th Chapter carry out the same standards in as we support or local Civil Air Patrol units. Such is the case as the AFA-317th appeared to have been the sole Florida AFA Chapter to have sent and had a representative to attend and support the recent the Civil Air Patrol (CAP), Florida Wing yearly conference.
The AFA-317th past President Mr. Benny F. Benitez attended the conference and proudly represented the AFA as a viable supporting factor to the CAP, particularly the Tamiami 355th Composite Squadron. While at the conference, Mr. Benitez met and engaged with many CAP officials and attending vendors like Elite Simulation Solutions who were present displaying their flight simulator training units. It was with great pride to have seen the 355th Blacksheeps win the award of Florida top CAP Squadron.
Posted by AFA-317th Public Affairs Office at Thursday, April 28, 2016