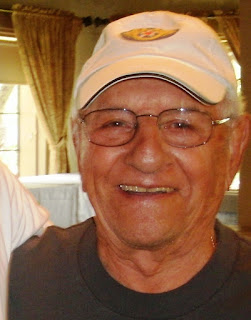 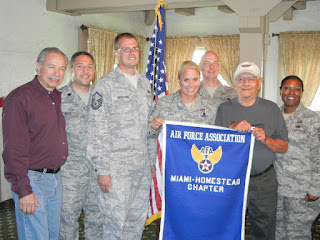 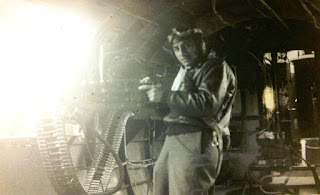 Mr. Shweky manning the port side, 50 caliber, Browning waist machine gun of his Boeing B-17F  heavy bomber. Sy was also a highly trained radio man within the crew. Radiomen of B-17 bomber crews were highly, technically specialized technicians of their time, sort of today Information Technology "IT" specialist 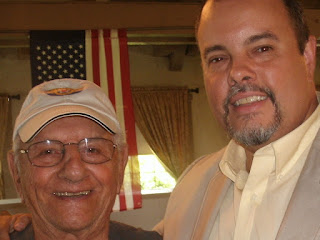 Shown with former Chapter President Benny Benitez who assisted Mr. Shweky to present his vast array of personal World War II B-17 crew gear which he brought to the May 10th 2012 luncheon for all to see and learn about, which including his white, silk scarf that his Mother gave him for good luck of which apparently worked as Mr. Shweky completed 35 combat missions when the average for B-17 crews was 8 missions and where 25 missions was a feat of accomplishment.


The Air Force Association Miami-Homestead Chapter-AFA-317th regrets to advise of the passing of World War II, aerial combat Veteran, U.S. Army Air Corp, 35 missions, B-17F, heavy bomber crewman Mr. Seymour "Sy" Shweky who passed away on Saturday 6th August 2016 in Hollywood, Florida at the age of ninety-two 92 years old.
Mr. Shweky honored us with his presentation of his B-17F aerial combat experience over the European Theater of Operation (ETO) and Nazi held France at our May 10th 2012 luncheon which was held at the 94th Aero Squadron Restaurant.  Upon learning of Mr. Shweky 35 aerial combat missions over the ETO and many over France, the  Air Force Association Miami-Homestead Chapter-AFA-317th under the leadership of Chapter member Mr. Steven Edelstein, Esq. and The Foundation for Holocaust Education Projects (FHEP) led the way to assist Mr. Shweky obtained and thus be officially awarded the French Legion of Honor Medal by the French Government via the French Consulate of Miami, Florida.We salute and shall always remember Mr. Shweky presentation and his dedicated service to his beloved family and our great Nation.
Rest In Peace Sir. We morn the lost of an American Hero.