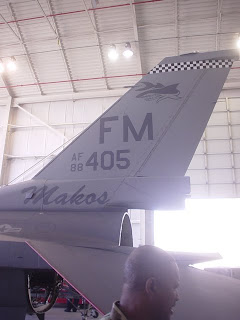 The "Mako" shown above is undergoing an engine replacement and as soon as the replacement engine is installed, quality checks executed and test and run up are accomplished ship "405" will return to the active flight line and be a contributing factor toward sortie completion. All a testament to the men, women and leadership at Homestead Air Reserve Base 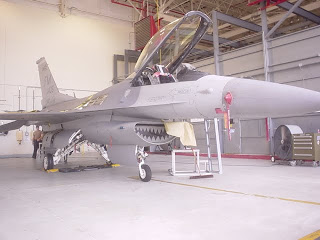 The high level of proficiency and attention to details allow the 482nd Fighter Wing and the 93rd Fighter Squadron and under the overall leadership of Col Mike Reid, Maintenance Group Commander to produce "Up Planes" and added toward training and real sortie mission 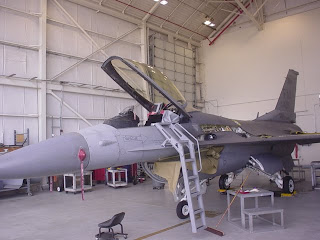 A Mako of the 93rd Fighter Squadron undergoes scheduled maintenance
Miami, Florida 24th November 2009: Recognizing and realizing that the mission of the Air Force Association and the Miami AFA-317th Chapter is to promote, foster and encourage the public awareness and understanding of United States Air Power and to assist the men and women who make all happen 365 days a year. The Miami AFA-317th Chapter shall be instituting a new connection with the Homestead Air Reserve Base 482nd Fighter Wing / 93rd Fighter Squadron "The Makos" F-16 Maintainers.
As a former Grumman F-14 Tomcat and Lockheed P-3 Orion maintainer, both at sea and ashore, former aircrewman on board the P-C Orion and a 20 plus year FAA A&P licensed maintenance management veteran of the commercial airline maintenance industry and world renowned aviation consultant, the AFA-317th newly installed President Benny F. Benitez, wishes to establish an award of excellent and reorganization toward the "Crew Chiefs" of the 93rd Fighter Squadron in as each yearly quarter, the AFA-317th Miami Chapter working closely with Col. Mike Reid Maintenance Group Commander will recognized and pay tribute to an outstanding "Crew Chief" based on his or her merits concerning military bearing, job / skill proficiency, morale and community service.
This shall be a first for the AFA-317th and with the assistance of their outstanding "Community Corporate Sponsor" this will be a worth wild effort and a tremendous message to the troops, that the AFA-317th Miami Chapter and the Community at large both care and appreciate their efforts to excel and master their skills that contribute to the success of the United States Air Force. (Click-on any pictures within this article to enlarge)
Posted by AFA-317th Public Affairs Office at Wednesday, November 25, 2009