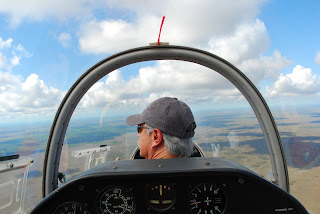 Miami Chapter 317th Vice President Rodrigo "Rod" Huete checks his surrounding at a flight level of about 2,500 feet over the general area in and around Homestead General Airport known as field identifier X-51, as his backseater Miami Chapter 317th Secretary Catherine "Cat" Smallwood captures the moment and hands off the control to the Vice President 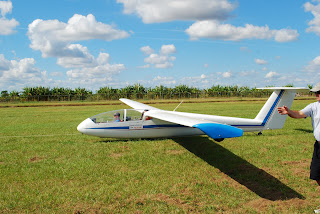 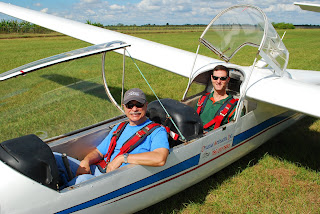 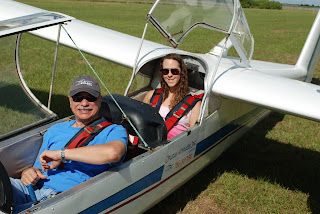 Homestead, Florida General Airport 21st November 2009: As soon as the new leadership at the Miami Air Force Association 317th Chapter was installed, the Chapter Vice President Rodrigo "Rod" Huete and Chapter Secretary, Catherine Smallwood accompany by University of Miami AFROTC Det. 155 Commander, Lt. Col. Theo Theodore, Jr. headed to Homestead General Airport, field identifier, X-51 to go aloft on the silent wings of a schwizer glider.
Chapter Vice President, Rodrigo an accomplished former USAF Lt. Colonel (Ret.) F-16 & F-15 Fighter / Test Pilot and FAA Designated Engineering Representative had to accomplished his glider proficiency check out and had very little trouble in inviting Chapter Secretary Catherine Smallwood who is an FAA Goldseal Flight Instructor and an airline ERJ-170 Regional Jet pilot to come along for some back seat stick time. Also invited was Col. Theo Theodore the University of Miami AFROTC Det. 155 Commander who also got to the ride the back seat, as "Rod" swapped out his backseaters to accommodate everyone.
The AFA-317th look forward to establishing a relationship for Corporate Sponsorship with Miami Gliders for the benefit of introduction flights for the Cadets at U of M AFROTC Det. 155. (Click on any picture within this article to enlarge)
Posted by AFA-317th Public Affairs Office at Wednesday, November 25, 2009