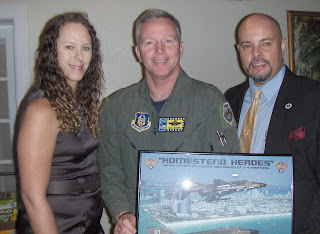 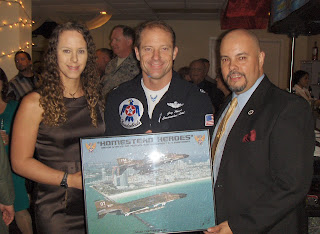 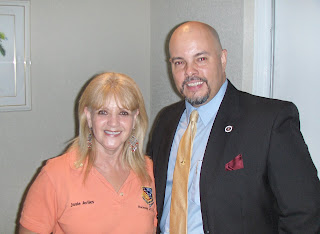 Homestead Air Reserve Base 6th November 2009: Harnessing their industry presence and power for the benefit of the 317th Chapter and as a special gift to both Brigadier General Binger and Lt. Col. Thomas, the Digital Aircraft Factory, a subsidiary of the Miami based 94th AeroClaims-Aviation Consultant Group under the technical and artistic leadership of it Director, Ms Catherine D. Smallwood created a one of a kind never before seen rendering of South Florida only two public, static displayed F-4D's Phantoms flying in formation over South Beach. The two subject aircraft's are tail code "OY" which graces the entrance at Homestead A.R.B as a proud gate guard and the second aircraft "FM" sits proudly on U.S. 1 in downtown Homestead. Both Brigadier General Binger and Lt. Col. Thomas were highly pleased and both were in awe over the scope of the detail and work that went into creating the life like image.

In 2010, the 317th Chapter under the creative leadership of Catherine Smallwood who is the newly elected and installed Chapter Secretary, shall create a few special rendering to commemorate Miami / South Florida contribution to the long and rich history of the United Stated Air Force for the benefit of raising funds for the Chapter concerning their sales and for special V.I.P gifts. (Click-on any picture within this article to enlarge)