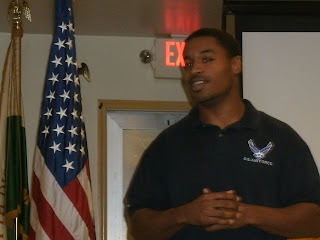 In attendance as a guest speaker at the Civil Air Patrol Tamiami Composite Squadron 335 annual banquet was Sr. Airmen Romaine Pryor USAF from the Junior Enlisted Council at Homestead Air Reserve Base who commended the troops of the 335 for their effort and assistance during last year airshow at Homestead Air Reserve Base and looks forward to their assistance for this year show 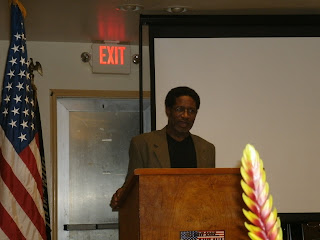 The special quest speaker at the event was three time Miami Dolphin Super Bowl Champion Mr. Eugene "Mercury" Morris who spoke about what core values means to him and as to how the cadets of the Civil Air Patrol, Tamiami Composite Squadron, the 335 embodies those value 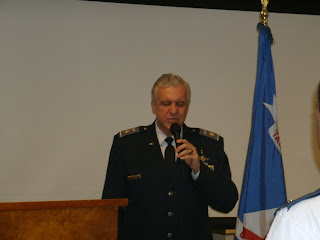 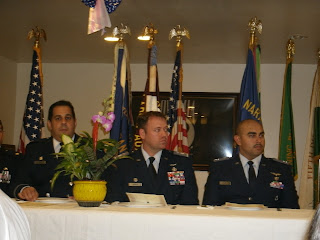 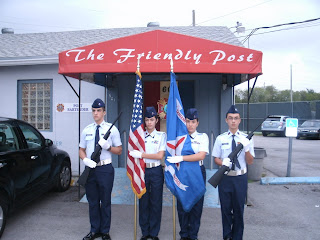 Standing outside the enter to the VFW Post 4127 "The Friendly Post" are the Tamiami Composite Squadron, 335 Color Guard proudly displaying the colors

Homestead, Florida 23rd January 2010: In an effort to promote, establish and project the presence and abilities of the Miami Chapter Air Force Association, the 317th leadership led by its President Mr. Benny F. Benitez proudly represented the 317th at the Civil Air Patrol, Tamiami Composite Squadron 335 annual banquet, which was held at the Homestead VFW Post 4127. Accompanied by the Chapter Secretary, Ms. Catherine Smallwood, who also serve as the Chapter Public Affair Office photographer, the Miami Chapter Air Force Association not only showed its presence and support toward the Cadets of 335, but handed out various AFA awards to the distinguished Cadets.
Given the opportunity by Lt. Col. Manuel Pelati, Group 7 Commander the AFA-317th President addressed the audience about the Miami Chapter Air Force Association and as to how the Chapter under his leadership looks forward to working with the Cadets of the Tamiami Composite Squadron.
Chapter Secretary Catherine Smallwood who is an FAA Certified Flight Instructor with all applicable ratings held a side bar conference with the leadership of the Tamiami Composite Squadron about assisting with her time and talent within their flight operations department.
As a foot note the Tamiami Composite Squadron of the Civil Air Patrol was stood up back in 1980 and in 1982 it established itself at Tamiami Regional Airport (KTMB) and in 1987 in took up residence at its current facility, the Wings Over Miami Air Museum, formally known as the Weeks Air Museum.
Posted by AFA-317th Public Affairs Office at Saturday, January 23, 2010