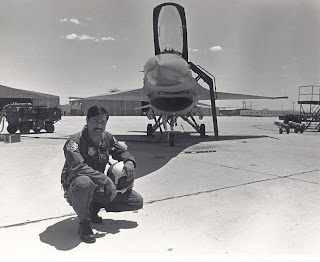 Shown next to his F-16 Falcon on sun baked flight line at Edwards Air Force Base back in the early 80's is AFA-317th Vice President, Col. Rode Huete USAF (Ret.) who flew as an F-16 Test Pilot 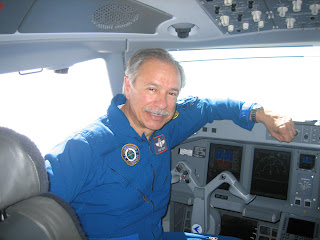 
Miami, Florida 8th January 2010: Rodrigo J. (Rod) Huete is presently a Test Pilot Consultant, recently retired from the Federal Aviation Administration (FAA), New York Aircraft Certification Office after having served the FAA for almost fourteen years. Rod also retired from the USAF in 1993 as a test pilot. He was a T-38 instructor Pilot, was a Flight Test Engineer in developmental testing of the F-15 and then was an F-15 fighter pilot in Germany.
He is a graduate of the USAF Test Pilot School, class 81A, stayed at Edwards AFB as an Air Launched Cruise Missile chase pilot, and then as chief of the Airframe Branch in the F-16 Test Force where he tested the first F-16 major electrical system upgrade, the LANTIRN pod structural verification and the first Digital Electronic Engine Control (DEEC) on a fighter engine. Rod was then assigned to the USAF TPS as an instructor test pilot where he was the lead instructor for spins and was triple rated in the F-4, T-38 and A-37.
Between flying duties Rod was assigned as special assistant to the Commander-In-Chief, US Southern Command in Panama where he programmed the requirements of Low Intensity Conflict technology such as the C-27 STOL aircraft, and the Caribbean Basin Radar Network (CBRN). He returned to flight testing at Edwards AFB as the Director of Safety flying the F-15 on APG-70 radar product improvements.
After retiring in 1993 Rod worked for the National Test Pilot School (NTPS) as an instructor test pilot and was assigned to Venezuela to complete the VF-5A/B avionics upgrade program which included a new weapons computer, a Heads-Up Display and it required a full air-to-ground weapons qualification. In the FAA Rod was the primary certification test pilot for all Bombardier jet products, he was part of several multi-pilot evaluations introducing glass cockpit concepts to Part 23 airplanes such as the Avidyne and Garmin G-1000.
As the Lead Flight Safety Officer for the Aircraft Certification Service Rod was integral in establishing the FAA Flight Test Risk Management process through FAA Order 4040.26; he was also the FAA lead for the NASA/FAA Flight Test Safety Database. Rod is type rated in the A-320, B-737, CRJ-100/200/700/900, Challenger 604/605, Challenger 300, Global Express and is also Seaplane and Glider rated. Rod is a two-time winner of the SETP Tony LeVier Flight test safety award (2000 and 2008).