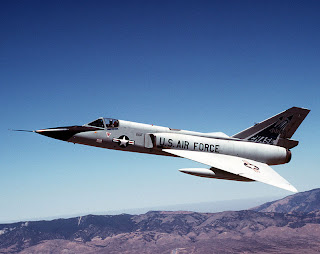 Shown is the famed "Century Fighter" the Convair F-106 "Delta Dart". Aside of the two common platform which both Rod and Eric flew, thus being the F-16 & F-15, they too share flight experience with the F-106. The F-106 was flown by the Florida Air National Guard. 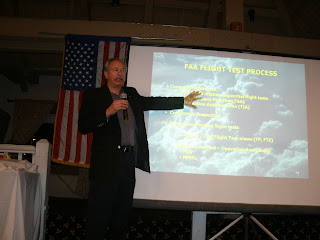 Air Force Association Miami-Homestead Chapter, the 317th, President Lt.Col. Rodrigo "Rod" Huete USAF (Ret.) speaks to the audience of the Miami hangar of the Quite Birdmen Association about the realm of military and civilian test flight and the requirements of test pilots. 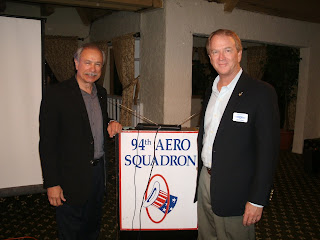 Lt.Col Rodrigo "Rod" Huete USAF (Ret.) a former F-16 & F-15 test pilot poses for a picture with "Eric" also a former F-16 & F-15 pilot who was formerly with the Florida Air National Guard. Eric a member of the Miami hangar of the Quite Birdmen Association and who like Rod for flew THE famed Convair delta wing F-106 "Delta Dart". 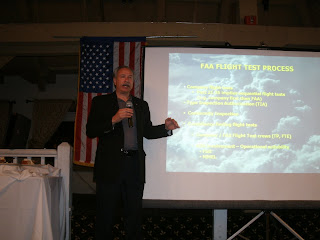 Lt.Col Huete USAF (Ret.) explains to the audience comprised of both civilian and military pilots of his experience as a member of the U.S. Air Force Test Pilot School and as a test pilot for the Federal Aviation Administration (FAA) while based out of the FAA Aircraft Certification Office (ACO) New York


Miami, Florida April 6th 2010: AFA-317th Chapter member Bernie Schumacher, who is an active member of the Miami Quite Birdmen Association, extended a special invite to AFA-317th Chapter President Lt. Col. Rodrigo "Rod" Huete USAF (Ret.) who spoke about the realm of military and civilian flight testing and test piloting at the Quite Birdmen Association April meeting, which was held at the 94th Aero Squadron Restaurant.
Also, present by invite was AFA-317th Chapter President, Benny F. Benitez, who along with Rod proudly represented the 317th and provided copies of AFA magazines to the attendees.
Rod's speech present an in depth look at what is often a secret and unknown world of the test pilot. From the days of our Nation's space exploration "The Right Stuff" to today's corp of American and foreign test pilots, both military and civilian, the audience was able to obtain a detailed briefing as to how it all plays out. Rod's ability to blend his real life experience as test pilot with the USAF and the FAA with formulated instructional visuals cues and slides, provided a brilliant, informative and entertaining evening for all who attended and gave yet another positive exposure to the AFA-317th within the community.
A special thanks goes out to the member's of the Miami Quite Birdmen Association for extending a warm welcome to the AFA.
Posted by AFA-317th Public Affairs Office at Tuesday, April 06, 2010