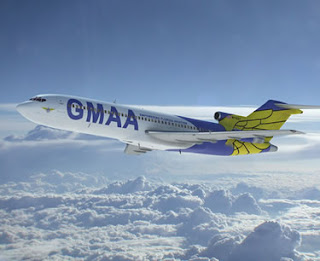 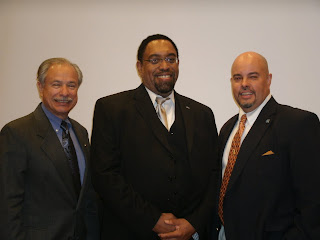 Shown above are AFA-317th President, Lt.Col. Rodrigo Huete (left) and past Chapter President Benny Benitez (right) with past Greater Miami Aviation Association (GMAA) President, Mr. Marc Henderson. The AFA-317th Leadership has embedded themselves via elected positions into the (GMAA).

Miami, Florida 14th April 2010: Founded in 1927, the Greater Miami Aviation Association, commonly known in South Florida as the GMAA is the Nations oldest, professional aviation association. Founded four years before what is now a days Miami International Airport, the GMAA 83 year span has seen the progressive development of the U.S. commercial aviation industry, whose roots were established in Miami with such famous airlines as Pan American World Airways and Eastern Airlines.
The "Relevent" leadership and mindset in which Benny and Rod have implemented within the AFA-317th since November of 2009 and having worked in a sort of "wing-man" concept is now being "exported" to another Miami based organization. It should be noted that with the election of Rod onto the GMAA it marks the first time in the organization 83 year history that it has had a dual Military & Civilian Test Pilot as an elected official on it Board of Directors. Benny has been a member of the GMAA since he stood up his organization, the 94th AeroClaims-Aviation Consultant Group back in 2003 and has held previous positions within the GMAA as a member of the its Board of Directors and was formerly 1st Vice President.
In 2009, Benny took a leave of absents due to operational commitments, as he applied time and effort to other ventures of which included the ramping up of the AFA-317th, but maintained his contacts with the (GMAA) as an advisor to the past President Mr. Dan Sullivan.
Posted by AFA-317th Public Affairs Office at Thursday, April 15, 2010