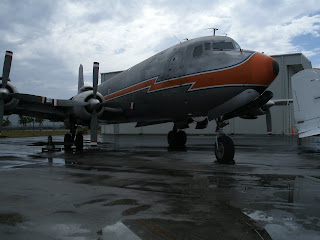 One could only imagine the untold numbers of passengers that this aircraft a Douglas DC-7C has carried in its glory years, when the commercial airline industry was very different from today and yet after all those years this aircraft still earns a living, as it soldiers on as a cargo carrier for Florida Air Transport an established and experienced Opa Locka, Florida based FAR 125 operator 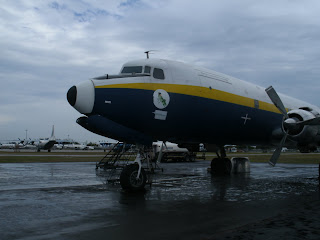 A veteran of the recent Haitian earthquake relief fleet of aircraft that transported endless amount of supplies and relief equipment from South Florida to Port Au Prince airport sit poised ready for its calling. Note the "Grasshopper" logo on the forward section, as the flights to Haiti were called and identified by the USAF combat controller who managed the airspace as "Grasshopper" due to the fact that such aircraft's landed on the grass area along the main runway to save the "asphalt" for the heavy jets 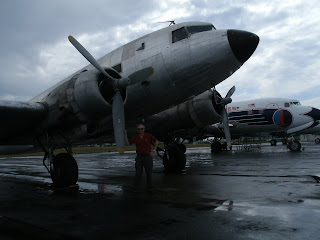 AFA-317th Chapter Vice President Lt. Col Rodrigo "Rod" Huete USAF (Ret.) stand next to an RD4, the U.S. Navy version of the venerable Douglas DC-3. This aircraft too earns its living by hauling cargo to the local islands within the Bahamas as well as other destinations within the Caribbean 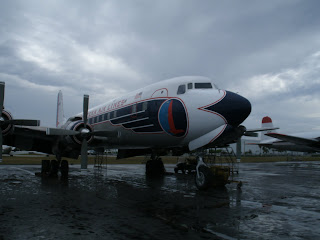 Another Classic a Douglas DC-7B that was saved from the torch of the scrapper and restored to its former glory as Silver Falcon airliner for Eastern Airlines. This aircraft will soon be flying the national airshow circuit, as a flying museum belonging to the Historical Aircraft Flight Foundation. This is the ONLY DC-7B in the world to have been restored to its original airliner condition 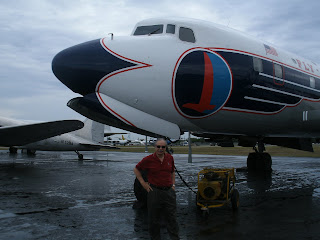 A far cry from the supersonic jets that Lt. Col Rodrigo "Rod" Huete once flew as a former USAF Test Pilot, but nonetheless it was aircraft's such as these classic "round engines" that fueled "Rod's" love and admiration for aviation as a boy. He commented on the amazement that was seeing the engines of Braniff's DC-6's & 7's chug to life by belching out smoke and sputtering oil at his local hometwon airport

Opa Locka, Florida 26th March 2010: Working within the "wing man" concept the President and Vice President of the Air Force Association Miami-Homestead Chapter, the 317th are becoming a common site through out the greater Miami area. Benny and Rod have coordinated their efforts and professional schedules to bring and promote the AFA to many of their clients and colleagues. Being that both of them operate well established, recognized and respected aviation consultant firms within the greater Miami / South Florida area, the task of blending their efforts to advocate for the support of the Miami-Homestead Chapter within their daily operational schedule is fairly easy.
Their trip to Opa Locka took them to visit Wisetouch Interiors an aircraft interior service provider company and a prospective supporter of the AFA. It has become standard operating procedures between Benny and Rod to be pro-active and aggressive when promoting the AFA and seeking community / industry support. The high lite of the visit to Opa Locka airport was nonetheless the ability to tour the flight line and walk among the classic "round engine" aircraft's of which there are not too many still left operationally or still earning their keep.
Posted by AFA-317th Public Affairs Office at Sunday, March 28, 2010