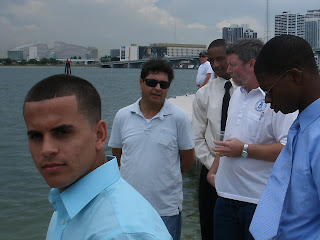 Shown in sunglasses is Captain Roberto Gomez, the Manager of the Watson Island Sea Plane Base conversing with Dr. Sean Gallagan, Principle of the George T. Baker Aviation School 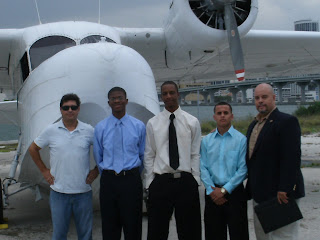 Chapter President Benny Benitez with Captain Gomez and the three George T. Baker Aviation School students who were the candidates for the intern program at Watson Island 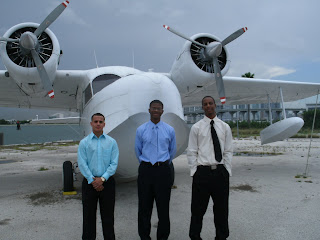 The three selected students shown with the Grumman Goose, N119AA which their technical ability will help keep the aircraft in an airworthiness condition 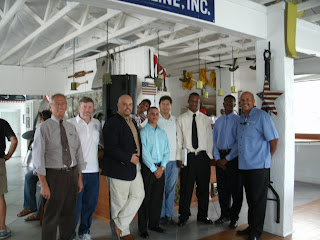 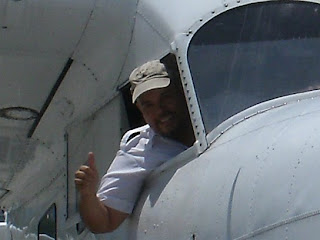 Miami, Floirda / Watson Island 18th June 2010: As a member of the local aviation community of South Florida and strong supporter of education for the youth of Miami-Dade, AFA-317th Chapter President, Benny Benitez along with industry colleague, Captain Roberto Gomez and in working closely with the George T. Baker Aviation School of Miami-Dade, established the first ever paid, Summer internship for three aviation technical students at the Watson Island Sea Plane Base in supporting a Grumman Goose amphibian aircraft..
The AFA-317 leadership structure consisting of Col. Stan Boder USAF (Ret.) former Chapter President and Lt. Col. Rodrigo "Rod" Huete USAF (Ret.) Vice President along with Benny Benitez are always in search for creating and establishing opportunities within the community for aviation student to obtain experience and industry exposure.
Working closely with the leadership at the George T. Baker Aviation School, Principle Dr. Sean Gallagan the connection beneficial toward three selected students was achieved.
Watson Island Sea Plane Base, dating back to 1927 and the George T. Baker Aviation School, dating back to the 1950's are one of the two oldest aviation sites in Miami, Florida. The vision of the 317th resulted in these two organization coming together for the benefit of local aviation students.
The selected students are currently enrolled within the FAA Airframe & Powerplant program and have basic aircraft maintenance experience that will be apply in supporting the Grumman Goose for continued operation.
Posted by AFA-317th Public Affairs Office at Sunday, June 20, 2010