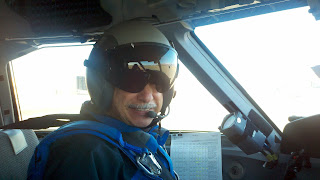 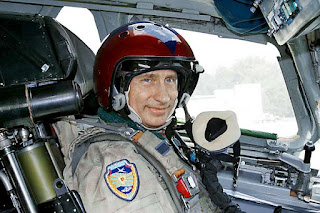 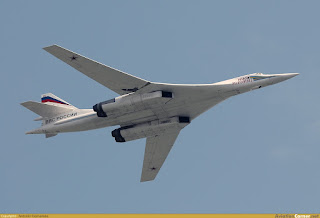 Miami, Florida 25th May 2012: Strangely, shown above are two pictures of two different men, serving two different Presidency, sitting in two different aircraft's within two different part the world, thus taken at two different time, but yet achieving the same thing! the sense of being being at the control of an aircraft.
We at the AFA-317th like to believe that Russian Vladimir Putin copied Lt.Col. Rodrigo poses for a promo photograph showing what a leader look when in control. We at the AFA are flattered for this international recognition and admiration by the Russians.
But it should be noted that despite the many attributes that President Putin poses, he is not a trained nor an accomplish military / civilian test pilot unlike Lt. Col. Rodrigo and we at the AFA-317th would relish at the chance to have our President sit, fly and be checked out the controls of Tu-160, maybe the AFA-317 could execute an international exchange program bewteen leaders of military associations for the sense of international stability.
If there ever was such an idea, rest assure that America's most "Relevant" Chapter within the Air Force Association would proudly and as effective as a group of U.S Army Rangers would "Lead the Way!"
Therefore, we at the AFA-317 hope that Russia Ambassador to the United Nation, Ambassador Vitaly Churkin may see this posting within out blog.
Posted by AFA-317th Public Affairs Office at Friday, May 25, 2012