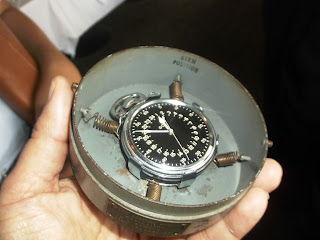 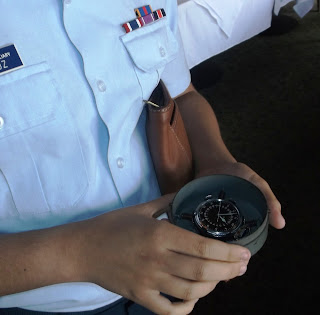 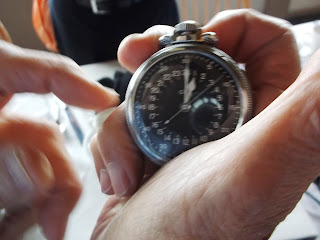 In the same manner in which it was held over seventy (70) plus years ago, 2nd Lieutenant Newman hold his stopwatch and demonstrates as how it was used and amazingly enough the time piece still function perfectly as if it was 1944 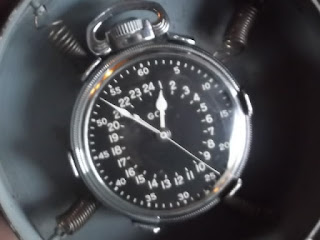 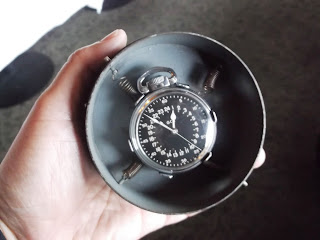 Miami, Florida 10th March 2016: As we all enjoyed the insight that 2nd Lieutenant Stuart Newman brought to the March AFA-317th luncheon with his detailed and vivid accounts of his Boeing B-17G Fly Fortress combat experience, we were also treated to yet another delightful and amazing piece of functional U.S. Army Air Corp. history.
Lt. Newman brought in his original U.S. Army Air Corp. issued Navigator pocket stopwatch. Despite it being small this was a critical part of the crews equipment and especially for Lt. Newman as the Navigator / Bombardier, as this time piece once synchronized back at the crew briefing before take off would in fact tie in all the other aircraft within the bombing formation with a sequenced time pacing. Much to everyone surprise was the fact that its still worked as indented after all these years.
Lt. Newman with a pure sense of ease and confident as he did so many time before at actual operational briefings set his watch, clicked it bezel top mount button and showed all of us as how he and the time piece would track the time to a target or track time when plotting a course. Truly the man and his pocket watch were the predecessors to today's modern day Global Positioning System (GPS).
Posted by AFA-317th Public Affairs Office at Friday, March 11, 2016