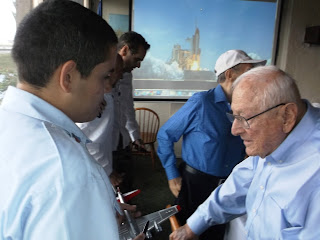 After his captivating presentation 2nd Lieutenant Newman was approached by Chapter member Cadet Senior Airman Cruz to say thank you for his presentation, service and to respectfully ask Lt. Newman to sign his B-17G model from his collection of american airpower aircraft 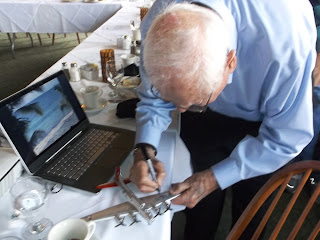 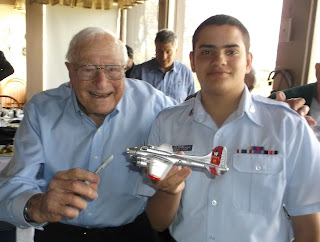 Shown are two happy Airmen! The proud linage continues from one generation to another 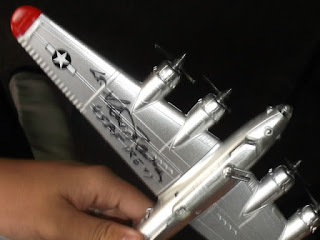 
Miami, Florida 10th March 2016: There is much to be send about three important traits within our nation military and society at large and they are traditions, admiration and respect and those three qualities were surprisingly evident within one of the Chapter youngest member, Cadet Senior Airman, A, Cruz from the Civil Air Patrol (CAP) Tamiami Squadron, the 355 Blacksheeps.
Knowing of the scheduled guest speaker, Cadet Cruz brought in his model B-17G so as to be autographed by 2nd Lieutenant Newman himself. Lt. Newman was taken by this gesture and request and gladly signed the young Cadet B-17G model.
It was clearly evident by Lt. Newman facial expression that he was happy to see the next generation of  young American continue in the proud and established lineage of the then the U.S. Army Air Corp, and now the United Stated Air Force. In asking the young Cadet as to what he though of Lt. Newman he replied "I am the luckiest Cadet in my entire CAP Squadron to have had the pleasure of meeting and shaking the hand of such a great American as Lt.Newman".
Posted by AFA-317th Public Affairs Office at Friday, March 11, 2016