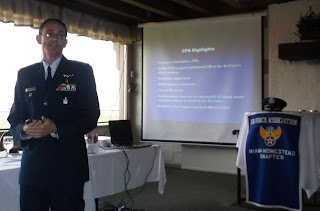 Civil Air Patrol Major, Major Manuel Pelati is welcomed by all chapter member who were in attendance and who were all presented with a wonderful presentation and insight into the Civil Air Patrol and the function it plays within our communities 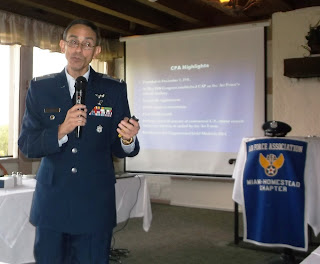 Major Pelati informed all who were in attendance of the Civil Air Patrol now being part of the U.S. Air Force "Total Force" along with Reserve and Air Guard Units 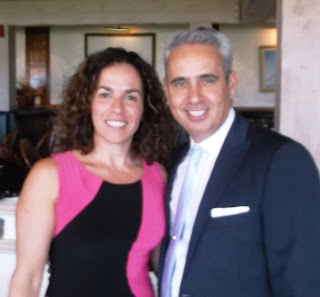 Representatives from the George T. Baker Aviation Technical College. Shown is Principle Mr. Rene Mantilla who is the Chapter Vice President of Aerospace Education for the Chapter 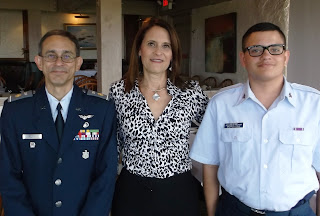 Shown from left to right is Major Pelati-CAP, Mrs. Llizo first time attendee to an AFA-317th luncheon and newly recruited member and the youngest active member of the Chapter Cadet Airman Cruz of the CAP-355th Tamiami Composite Squadron

Miami, Florida September 10th 2015: For the first time in recent Chapter memory since, 2005, the AFA-317th had the pleasure of having the Civil Air Patrol (CAP) come out and speak to all in attendance. Major Manuel Pelati was the guest speaker and presented a well informed speech that gave everyone a well rounded understanding of the mission of the CAP, both in the support and encouraging of aerospace studies among the youth of the United Stated, as well as to service it bring to the local communities with their contribution to search and rescue and disaster relief.  During Major Pelati presentation, he informed everyone that this past Summer the U.S. Congress past a law in which makes the Civil Air Patrol part of the "Total Force" of the U.S. Air Force. This means that Active-Duty, Reserve, USAF Air National Guard Units and the Civil Air Patrol are all part of the same force! This is an amazing accomplishment for the CAP who have always be considered the Auxiliary of the U.S. Air Force and now are but one segment of a total force concept. The AFA-317 looks forward to work and support the local CAP Squadrons of South Florida.
Posted by AFA-317th Public Affairs Office at Sunday, September 20, 2015