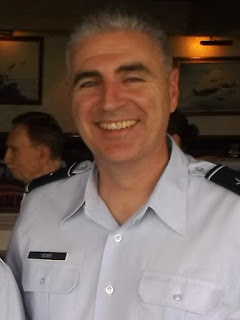 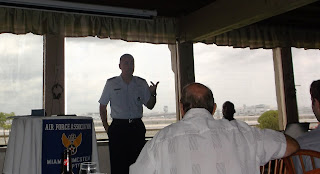 Brigadier General Thomas W. Geary (USAF) presented a well informed (UNCLASSIFIED) briefing on the efforts and purpose of his group within U.S. Southern Command and the role they play toward the interest of the United States with the Area of Responsibility (AOR) 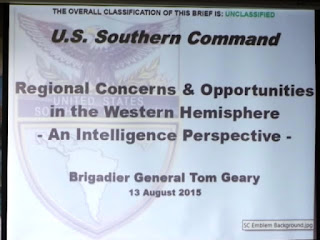 A snap shot of the General power point presentation

Miami, Florida August 13th 2015: The well presented and informative presentation given by Brigadier General Thomas W. Geary (USAF) gave all who were in attendance a good overview as to how intelligence plays a significant role in the overall security of the region. The General presentation cultivate a host of queries from the audience and resulted in engaging and enlightening all who were present. The General statements covered many areas of concern to the United Stated which U.S. Southern Command keeps an eye on. Afterward, the General was gracious enough to slightly modify his tight time schedule so as to meet as many of the Chapter members one by one and to continue entertaining one on one questions that still arose from the audience. On behave of the leadership at the Air Force Association Miami-Homestead AFA-317th Chapter,we wish to thank Brigadier General Thomas W. Geary for his time and informative insight, thank you!
Posted by AFA-317th Public Affairs Office at Sunday, September 20, 2015