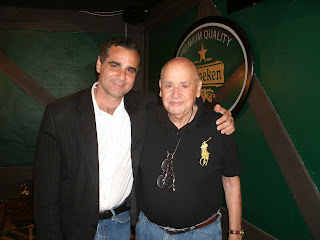 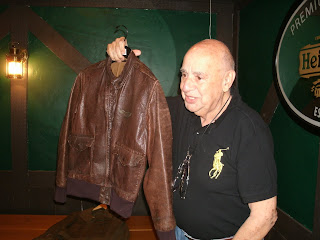 Chapter World War II member Mr. David Bernstein proudly shows off his original U.S. Army Air Corp issued A-2 leather flight jacket, which was fully and conditionally restored by his Daughter Michell who is a world known Miami based International Chef and proud of her Father service 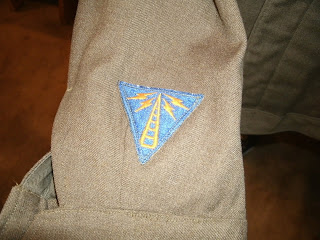 A close up of Mr. David Bernstein sleeve of his "Eisenhower Jacket" which shows the U.S. Army Air Corp. Radio-Gunner rating patch which was worn and displayed on the lower section of the right jack sleeve. Just like the A-2 leather jacket shown above, the Eisenhower jack was in great shape 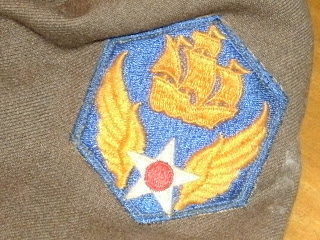 The logo for the U.S. Army Air Corp the Air Force, which was based in Panama during World War II and which was primarily tasked with the duty of coastal and deep water patrols for German Navy submarines "U-Boats". The cloth patch was worn on the upper left hand shoulder sleeve. Note the sailing ship which depicts Christopher Columbus ship, which was the logo for the Caribbean U.S. Army Air Corp. Command during World War II 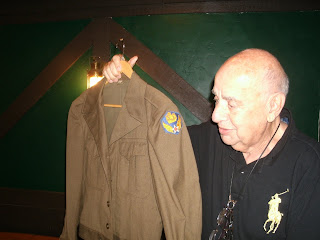 Telling his story as the lone and sole U.S. Army Air Corp. radio operator of a coastal observation station, Mr. David Bernstein show off his original U.S. Army Air Corp. "Eisenhower Jacket" still in great condition with unit and speciality patches. It should be noted that after all these year the jacket shows like new issue from the Army Quarter Master 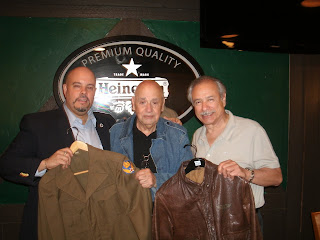 With great pride AFA-317th Chapter President Benny holding the Eisenhower jacket and Chapter Vice President Rod holding the A-2 leather flight jacket proudly stand with Mr. David Bernstien the Chapter World War II Veteran. We the AFA-317 salute and admire Mr. Bernstein for his service and are proud to have such an individual within our Chapter as its truly an honor

Miami, Florida 11th March 2010: We would like to commence this article by saying that we at the AFA-31th Miami-Homestead Chapter are honored to have Mr. David Bernstein as one of our Chapter member. With that said, on 11th March 2010 at the scheduled meeting, Chapter members were treated to a wonderful and informative presentation given by Mr. Bernstein about his World War II U.S. Army Air Corp, 6th Air Force experience in Panama.
Shown above were two uniform articles which Mr. Bernstein brought in and proudly showed off and allowed members at the meeting to inspect these items concerning the history of the U.S. Air Force. His story was both informative and amusing, as Mr. Bernstein has an amazing way of capturing your attention when speaking of his experience in World War II while stationed in Panama with the 6th Air Force. His duties consisted of operating a one man coastal radar site which monitored for German submarines (U-Boat) activity and which was relayed to 6th Air Force patrol aircraft's. For 18 months he operated and sustained himself totally independent from any other support units expect for the occasional support air drops. As he comically put it "the placed me out there and forgot about me".
Posted by AFA-317th Public Affairs Office at Thursday, March 11, 2010