Air Force Association Miami-Homestead Chapter, The 317th Meets With the Mayor Of The Village Of Key Biscayne 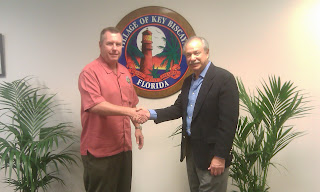 AFA-317th the Miami-Homestead Chapter Vice President Lt. Col Rodrigo "Rod" Huete USAF (Ret.) meets with the Honorable Mr. Bob Veron, Mayor of the Village of Key Biscayne. The AFA-317th continues their effort to reach out and embrace the local community as they stride for relevance within the public eye 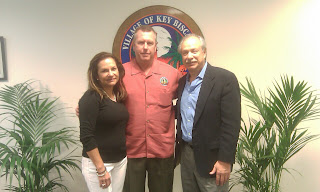 Shown with the Honorable Mr. Bob Veron, Major of the Village of Key Biscayne and Lt.Col Rodrigo "Rod" Huete, AFA-317 Vice President is Ms. Martha Kelly a prominent citizen of Key Biscayne and Director of Events for the Miami based, American-Nicaraguan Chamber of Commence which Rod serves as Chamber President


Village of Key Biscayne, Florida 17th March 2010: AFA-317th Vice President Lt. Col. Rodrigo "Rod" Huete USAF (Ret.) met with the Mayor of Key Biscayne, the Honorable Mr. Bob Veron. Rod's mission was to properly introduce the Air Force Association Miami-Homestead Chapter, the 317th to the Key Biscayne Village local Government. In addition, they discussed the participation of the AFA-317th Miami-Homestead Chapter in their 4th of July Parade.
The Key Biscayne 4th of July parade is the only formal parade in the entire Miami-Dade area honoring our Nation independence, the parade initiates with the playing our Nation anthem along with an impressive flyby of F-16 from the 482nd Fighter Wing / 93rd Fighter Squadron, "The Makos" based at Homestead Air Reserve Air Base.
In the Chapter pursuit of being "Relevant" within the local community, its is befitting that our Chapter be properly represented within this notable event. The AFA-317th plans to show its colors by parading in a yet to be determine classic model automobile to be provided by a local dealer.
Posted by AFA-317th Public Affairs Office at Thursday, March 18, 2010