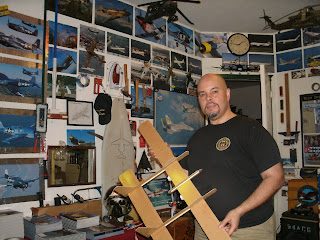 Within his "Aero Work Shop" AFA-317th President Benny Benitez holds the "WR-09" concept UAV model while still under production and prior to painting. The concept model was designed, created and finished within 48 hours over the weekend of March 13th / 14th by the AFA-317th President for presentation to the students to use as a design mock up / training aid 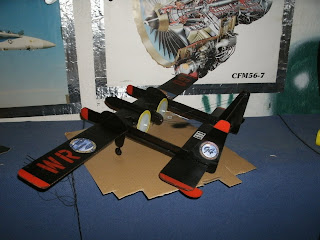 The 'WR-09" UAV concept model which was designed and created by AFA-317th Chapter President Benny Benitez was created to serve as an inspirational prototype for the students of George T. Baker in which the AFA-317th is closely working with and supporting their Hydrogen Powered UAV project 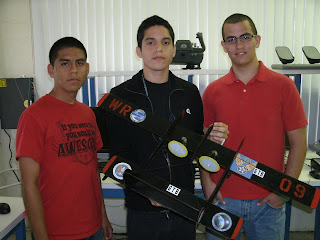 George T. Baker Aviation School Students and members of the project team shown from left to right are Christopher Paz, Juan Dorado and Christian Harris hold the "WR-09" concept model provided to them by the President of the AFA-317th so as to help them facilitate their ideas and production methods 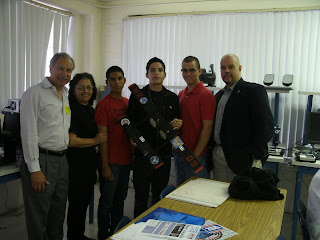 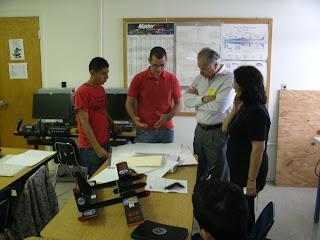 Student Christian Harris explains to Lt. Col Huete USAF (Ret.) the idea for their twin boom design for the proposed Hydrogen power UAV as the students use the demo "WR-09" as a focal reference point 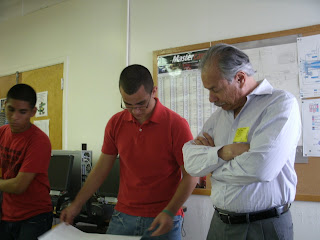 AFA-317th Vice President Lt. Col Rodrigo "Rod" Huete USAF (Ret.) looks at the plans for the proposed UAV design. Utilizing his discipline in Aeronautical Engineering and his experience as a USAF Test Pilot Lt. Col Huete brings a tremendous wealth of knowledge for the students to tap into for the benefit of mentoring their aeronautical studies


Miami, Florida 16th March 2010: The leadership of the Air Force Association Miami-Homestead Chapter, the 317th consisting of the Chapter President, Benny Benitez and its Vice President Lt. Col. Rodrigo "Rod" Huete USAF (Ret.) visited the students at George T. Baker Aviation School to continue showing the Chapter support toward the students project concerning the creation of a proposed Hydrogen powered UAV for a National science competition. Lt. Col Huete background as a former USAF Test Pilot and Aeronautical Engineer, coupled with the Chapter President background in aircraft design and maintenance as an FAA Licenced Technician are a wealth of support and inspiration for the students.
In their effort to motivate and inspire the students at George T. Baker AFA-317th Chapter President Benny Benitez over the weekend of March 13th and 14th dedicate his time to design, create and produce a concept UAV model called the "WR-09" for the students to have as a concept design model so as to have as a focal point, as they commence to take their idea from the drawing board to production. The AFA-317th is the only organization within Miami, Florida to have stepped up and answered the call to assist, foster and encourage the aeronautical interest and studies of our Nations future aerospace leaders.
Posted by AFA-317th Public Affairs Office at Tuesday, March 16, 2010